The MAPI client that rounds out your Zimbra Webmail 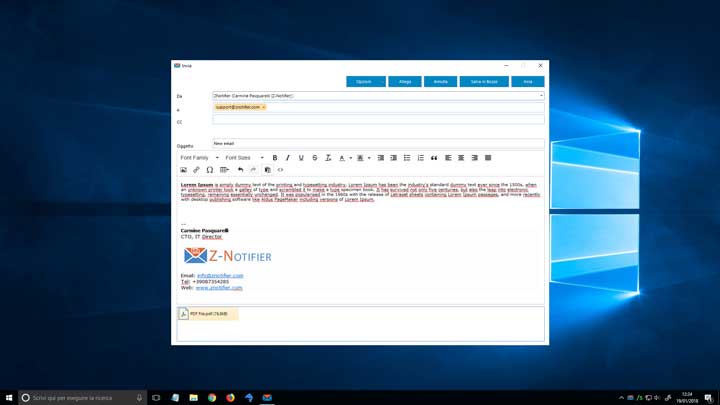 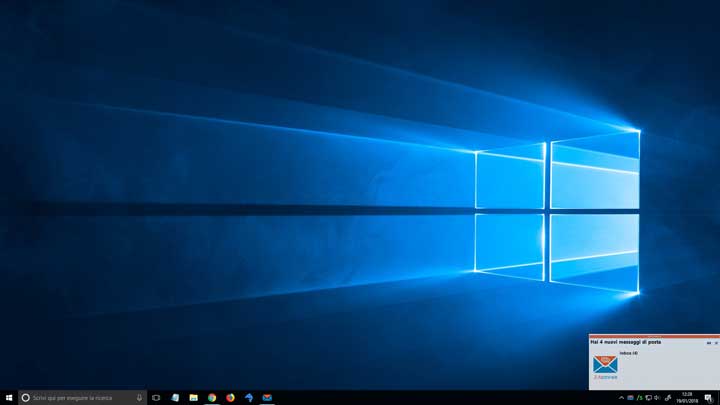 We like to call it the little desktop client for Zimbra. Developed for the Windows environment, Z-Notifier was conceived for all those users who use Webmail but don’t want to give up MAPI functions. Which means the possibility of attaching files directly from the Windows context menu or from applications such as Adobe Acrobat Reader or Microsoft Word. In addition to sending emails, Z-Notifier provides notifications for all incoming emails, whether they are in your Zimbra account inbox, in folders with applied filters, or in shared folders.

When a new email message arrives, Z-Notifier displays a pop-up showing the sender, subject, and a short preview of the message.

Natively based on Zimbra, Z-Notifier is also capable of understanding the destination folder of the email message, showing its color in the upper bar of the message. By clicking on the notification pop-up, the message is opened directly in Webmail, just as if you had double-clicked on the message in your Web client. This is achieved thanks to a Zimlet that complements our product.

And if you want to send an email message? Nothing could be easier with Z-Notifier. In addition to the “Send to” function mentioned earlier, Z-Notifier can send email directly from the Windows System Tray by clicking on “Send an email message.” A new message edit window just like the Zimbra Webmail window is opened.

Personal settings, accounts, contacts, signatures, and font settings are automatically synchronized from the Zimbra account. The end user only has to write the message! By indicating the Zimbra template folder, it is even possible to use the same forms as those specified in Webmail. Lastly, by enabling the highly convenient “UndoSend” function in the options, you have a few seconds to confirm the transmittal of emails before they are sent.

This is why Z-Notifier is the MAPI client that rounds out your Zimbra Webmail!

Notifications, MAPI functions, ID management, accounts, proxies, contact management, and much more! Find out why Z-Notifier is the MAPI client that rounds out your Zimbra Webmail and why you, too, must have it!

Are you afraid you’ll miss a new incoming email? With Z-Notifier you will always be in control of incoming email, both in personal and shared folders!

Imagine having the ability to attach a file directly from Word, Excel, or Acrobat Reader. Without using Outlook or Thunderbird. With Z-Notifier, MAPI functions can be used to their fullest!

How many times, when changing email client, have you faced the problem of re-entering your email signature? With Z-Notifier, nothing could be easier! Signatures are taken directly from your Webmail!

Are you dependent on your calendar? Are you afraid of missing important appointment notifications? Z-Notifier shows notifications, including reminders of your appointments in the planners, whether personal or shared!

Since the very first versions, the template Zimlet in Zimbra has been one of the most prized features by users. How about you, do you use them? Know of a client that allows you to use them? I do. Z-Notifier!

Have a PC with multiple active profiles? Want to use Z-Notifier with RDP? Z-Notifier stores the Zimbra access information in the user profile, allowing you to use it with several users!

Yellow for colleagues, red for clients, blue for shared. With Z-Notifier, you receive colored notifications based on the color of the inbox!

Z-Notifier is the fully integrated MAPI client for Zimbra! You can send emails to contacts in personal and shared address books without having to import anything. It’s completely automatic!

Are proxies,IDs, or external accounts set up in your Zimbra account? No problem. Z-Notifier will offer you the same settings as you have with Zimbra Webmail. Fully automatic!

Worried you might send an incorrect or incomplete email? Are you familiar with UndoSend? This Zimlet allows you to cancel the sending of an email within 30 seconds. You can also enable it on Z-Notifier!

Have you enabled Two Factor Authentication on your account? No problem! Management of Zimbra 2FA in Z-Notifier is identical to your Zimbra Webmail!

Z-Notifier is continually evolving. What about updates? When launched, Z-Notifier checks for new available updates and notifies the user!

How many times would you have liked to attach a file directly from your desktop without accessing your Zimbra Webmail? Or attach a PDF directly from Adobe Acrobat Reader, or a document directly from Word? Now you can with Z-Notifier! Thanks to MAPI support, attaching files to your email has never been so easy with Zimbra!

Do you prefer to write your messages directly in the edit window of your Zimbra Webmail? You can with Z-Notifier! Simply check the “Save attachment in drafts” box and your files will be attached to a new message in your Webmail!

The best alternative to Outlook!

Z-Notifier makes full use of the Zimbra API. So all your Zimbra account preferences are automatically carried over to Z-Notifier! Contacts, signatures, predefined fonts, personal settings and proxies, templates, and support for Two Factor Authentication: everything is set automatically!

In addition, you always have the ability to choose the email inboxes for which you will receive notifications of new incoming messages. For this reason, Z-Notifier is the best alternative to Outlook or other email clients in the Windows environment! What are you waiting for? Try it now, free for 30 days and without limitations! 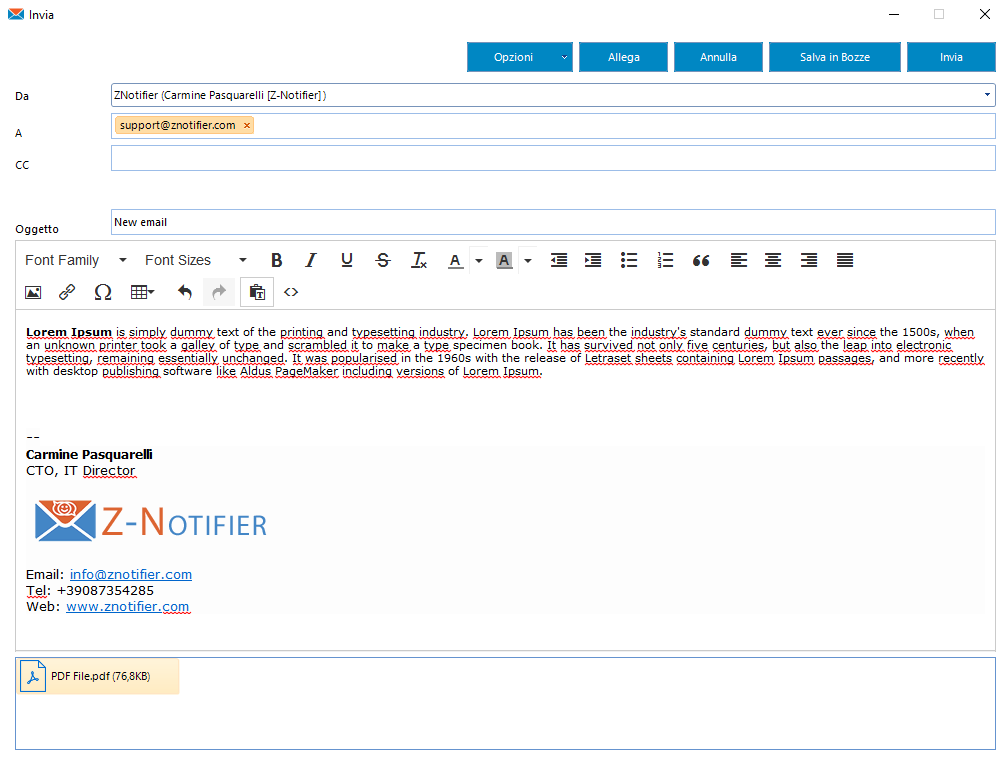 To meet every requirement!

Do you want more information about license cost? Write us!

What users are saying

Fantastic. Convenient, fast, and easy. Practically irreplaceable for our users. In addition, support is quick, ready to answer our questions and above all open to new ideas!

Z-Notifier is the Windows email client for Zimbra we have been looking for. Installation and configuration are extremely easy. Continual and automatic minor and major release updates. Which, ultimately, means a MAPI client for Zimbra that is easy to use and above all “fully integrated” with Zimbra!

Useful information and frequently asked questions.
Have any further questions? Is something unclear?
Write to info@znotifier.com

You can send us a message at the address info@znotifier.com. We generally answer within a short amount of time. If you have urgent questions, you can contact us at +39 0873 54285. We’ll be happy to help you out!

Absolutely not. The trial version has no limitations compared to the licensed version. You can try it out for free for 30 days. And if there are any problems or concerns, you can always contact us!

Yes, currently Z-Notifier can only be installed in a Windows environment. It requires .NET Framework 4.5.2. But we are not excluding the possibility of developing a Linux or MAC version. Stay tuned

We have tested Z-Notifier with Zimbra 8.6 and 8.7.11. However, we do not think there will be any problems with other versions of Zimbra. Otherwise, you can always contact us!

When a new email arrives, you will be notified by a pop-up. By clicking on it, Z-Notifier will open Zimbra Webmail in the predefined browser and put the ID of the email message in the url. Once Webmail is loaded, the Zimlet will open the email that just arrived in a new window as if you had double-clicked on the message in Webmail.

With the predefined setting, Z-Notifier checks for new email messages every 5 minutes (300 seconds). This value can be changed by going to Settings on the “Notifications” tab.

Certainly! With the predefined setting, Z-Notifier’s pop-up notifications disappear after 10 seconds. Not only is it possible to change this value, it is also possible, in the Settings on the “Notifications” tab, to specify whether or not you want the pop-up to close automatically.

Certainly! In the account settings, simply go to Settings, “Notifications” tab, and, from the folder tree, choose the folders for which you want to receive notifications.

If you are having problems with images contained in your signature, they have very likely been included as in-line attachments. We are working to resolve this problem. In the meantime, we suggest, if possible, that you modify the signature to include it as a link. We suggest this link to see how.

Z-Notifier is a continually evolving project. Many current functionalities are the result of requests from users. Do you have a new functionality to suggest? Contact us!

And don’t forget to visit our blog!

Download Z-Notifier now and activate your 30-day trial version! There are no limitations and if there are any problems or concerns, you can always contact us! 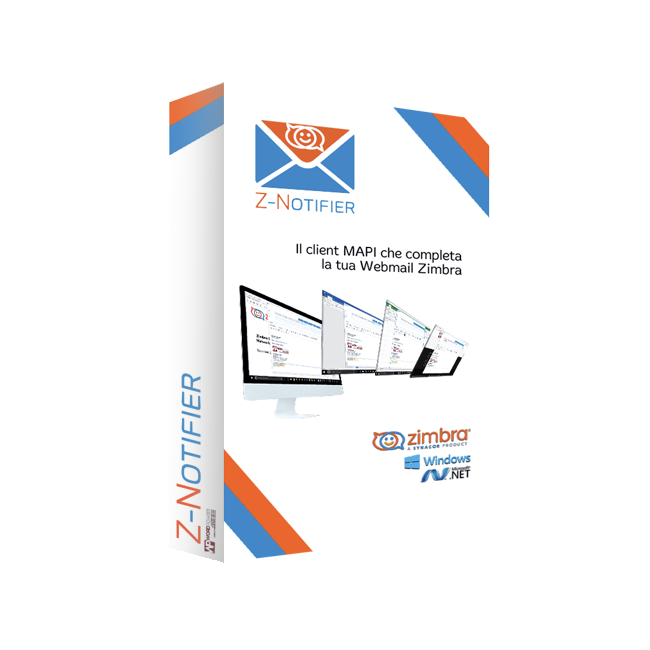